Sometimes, I need to remember:  I am a Writer.  This summer I got to LIVE and BREATHE writing, and it nourished my soul.  Yes, I remember soaking in the sunniness of it’s words and feeling it fill my body and created “I LIVE Poetry.”  Each day, I lived poetically with music and photography and art and just noticing…and my friends, I must say, I had never been happier.  I had to return to my job…which I love, but it IS a time sucker.   Soon I was in a whirlwind of meetings and have tos, instead of I want tos…and literally writing almost came to a screeching halt.  I pined for my artistic side to be fed…I remember noticing many things I wanted to sit and write about…but alas, my seat in the seat could not happen.  The best part was I understood it was temporary…

Last night, I got to enjoy a fabulous group of writers, and they reminded me of the beauty of words and the healing of words and yes, sometimes the mysteries and elusiveness of words.  I reveled in all that they shared.  Windows to souls…and I knew I wasn’t the teacher anymore, but a fellow participant who just loved what I was doing, ENGAGING in writing.

Writing, it has MAGIC POWERS…it can heal…it can bring joy.

Have a blessed day my friends.   And thanks to my buddy Michael, that sometimes it’s committing to just a few words a day. 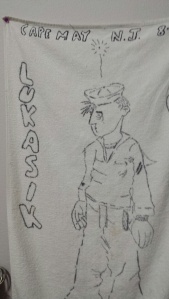 You’re gonna love this!  It’s from the Coast Guard 1957.  The artist drew it for my dad on his bootcamp issued towel.   Dad recently gave this to me.  It’s been in his bedroom, and I’ve seen glimpses of it…but until this year, he’s never let me in his room.  (Again, part of the vault opening up.)

Here’s what I love about it.  It’s got history!  There is so much history on this one towel!

I’ve been interviewing my daddy trying to get to know him better.  It’s only been the last three years that he’s opened the vault for me to peek in.  When I would ask him about the Coast Guard, sometimes he couldn’t remember specifics like dates and or places he went, and sometimes the names of the people he was with.

The good news is that when he gave me the towel, he gave me history…It says when and where he was in the Coast Guard, and his name and company name.  At the bottom, it’s signed by the artist…the very same name as my brother!

Dad vaguely remembered the guy and said he did a couple of tours with him…but he couldn’t give me details.  I understand…it was only 60 years ago!

The other cool part was that my daughter is in the Coast Guard too, and they still train in Cape May.  And the artist was just messing around.

Moral of the story:  Keep writing and keep drawing and keep taking pictures.  There’s someone who will love that history one day. LEAVE A LEGACY.

Let’s try this again! I think this would be super awesome to read your poetry and see your culinary talents…or at least through a family recipe in. We poets are usually creative in more than one area.

Writing Wings For You

Okay my friends…I was inspired by a poem I read yesterday that involved the tastes of a place.   And food brings about joyous memories with friends and families and those special people we love.  So, here’s my challenge:

Write a poem about the tastes of YOUR place…and then maybe include one of your favorite recipes…it can be from that place your wrote about, or one of your favorite recipes…I think it would be really cool to gather recipes of places from around the world….Then I can wake up and say things like, I’d like to travel to Austrailia today or Georgia, and pull a recipe out and be reminded of you!   Besides, my recipe box needs new tastes!   ENJOY!

Random thoughts on the Flavors of Texas

I’ll tell you a

half dozen things about 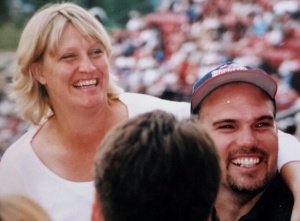 The reason I adore this photo is because it was such a genuine happiness picture.  My husband and I were truly “in the moment.”  The picture was not posed.  My friend took it when we weren’t looking.  We were at the Idaho Shakespeare Festival, which I adore, and we were just happy to be with friends and eating delicious food and laughing like crazy.  They have the most awesome Green Show.  You have to see it sometime.

For a most romantic proposal and another Throwback Thursday & dialogue, go HERE.

And another romantic story HERE.  (except this one was on a Tuesday…hee hee)

P.S.  If you ever go to the festival, be sure to go to the Green Show with the Fool Squad, and brings something fun to eat for them so you can be part of the show.  Oh my, you’ll laugh forever!